Actors: The Most Important People on the Planet 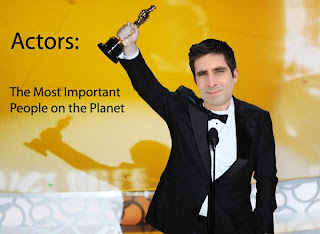 Actors are the most important human beings on the face of the earth — everyone knows that. Not scientists or teachers. Not astronauts. Actors. Actors are the ones that are out there every day make-believing their ass off. Pretending to be ninjas and politicians so that we can watch movies about them and be entertained for an hour and a half while we eat popcorn. I mean, what else would you do while you ate popcorn? Watch a real politician? Boring! That’s why the Academy Awards are so important. It’s a chance for these heroes to finally get what they deserve for pretending the shit out of stuff, a trophy.

I love listening to actors when they talk about their “craft” and the personal challenge they faced when transforming into the main character for the critically acclaimed film Big Momma’s House 2.

Did you know there’s no test to become an actor? You just wake up one day and go, “I’m an actor now.” And then, you are. Wouldn’t it be nice if you could do that with other professions. I’m a doctor now Miss so it’s totally cool for me to put this inside you. And now I’m a cop, so do it or I’ll arrest you. I SAID PUT THIS INSIDE YOU MA’AM I’M A COP NOW!!!!

I am an actor. I act. Because one day I said so. And I think acting is the weirdest thing in the world. I enjoy pretending and dressing up in costumes and stuff. Which I just realized is the exact same thing that perverts and five year olds do.

But being a good actor is hard. I mean, how do you even know if you’re good? In basketball, if you make X out of Y shots, you’re good. But actors are not athletic at all. And acting is subjective.

Actor: But I said it.

*This is an actual excerpt taken from my girlfriend’s acting class.

People don’t question whether or not you’re believable in real life because that would be weird. “I’M TIRED OF YOU CHEATING ON ME ALBERT SO I’M FUCKING LEAVING YOU!” Okay, I’m just not buying this. Could you maybe try it again but this time I want you to look me in the eyes and say it but do it while you’re walking towards the door and then throw this book at me, give me one last look and then walk away forever….

People think actors in movies are exactly like the characters they play. This is only true for Keanu Reeves and that kid who played Simon Birch. HAHAHA! I just cracked up thinking how great it would have been if those two actors switched roles and it was Simon Birch who took the green pill and fulfilled the Oracle’s prophecy.

If you meet a celebrity and tell someone about it the first thing they want to know is, “Was he nice? Was he a nice guy or was he an asshole?” And then regardless of whether you tell them he’s an asshole or a nice guy, people always say, “I could see that.” You could see what? You don’t know this person.

When I was a kid and I was retarded I used to think that the people in commercials weren’t actors but actual employees for the product, service or restaurants they were promoting. I realize I might be blowing some of your minds right now, but when someone tells you that they can’t get an erection or they have diarrhea or genital herpes on TV they’re acting. Except for the brunette girl from the last Valtrex commercial. She actually does have herpes – I know for a fact – because I gave them to her last year. But in every other case, the ad agency hires someone who looks like they would have these issues (which is even worse in my opinion) and then says, yes, you HAVE fallen and can’t get up. Somebody get me her fuckin agent!

I didn’t know what acting was really about until I went on my first commercial audition.

I was nervous. I really wanted to impress the people in the room so they would give me the job. I walked in, said hello, the camera operator had me say my name and the audition started. Here we go. “Okay Steve, pick up that bag over there and move it over here.” Just pick up the bag from over there and move it over here. No dialogue. Just move the bag. That’s it. They had me do it three times. And that was all, I was done. I thanked them, left the room and headed to my car, my mind spinning a million miles an hour. I couldn’t believe what just happened. Did I pick up the bag the right way? I could’ve put it down smoother. I should have used my right hand, it’s stronger. I hope they liked me!

But they didn’t. My suspicions were true. Some other bag-picker-upper-and-mover guy got the part over me. And it was for a KIA commercial which paid about $10,000.00. How the fuck can they pay someone ten grand to do that? I wouldn’t have done it for less than twenty — you know how embarrassing those cars are?

When you’re an actor you never have security. All you have is every single person in your entire family rooting for you every single time you see or talk to them or receive a card from them. ‘Oh, you’ll make it, don’t worry. You’re gonna make it, I’m not worried about you.” I’m not worried either. And make what? What the fuck are you talking about, Nana? You mean be famous like Humphrey Bogart? Because that’s not how it works. Of course my family only wants the best for me and I love them for that but it brings out the worst. I mean, I don’t tell my Uncle every time I see him to keep chiropracting, don’t worry. Just keep chiropracting and something will hit.