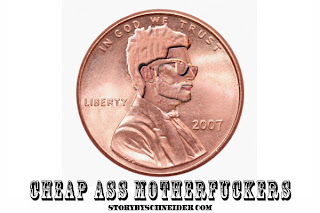 My Nana Ruthie used to take me to the movie theater when I was a little boy and after she paid for our movie tickets using her senior citizen discount to save a dollar fifty, we would rush into the theater without a chance to do my favorite thing: stop at the concession stand.

“I brought goodies,” she would tell me, and being no more than five and a clueless fucking idiot, I believed her every time. We’d make a b-line for our seats where she would unzip her pocket book and unveil her “treats” which included dietetic candies, Werther’s Originals and her own personal stash of popcorn which she popped the night before. It was in a plastic shopping bag, the same one she would put over her head to protect her hair if she was running out and it was drizzling and she just had it done.

I remember being so embarrassed at the time but she had no qualms about it. Like ‘this is what everybody does.’ I wanted to scream out, “WE BOUGHT THE POPCORN AT THE CONCESSION STAND AND THEN SHE PUT IT IN HER PURSE TO KEEP IT WARM, EVERYONE! WE’RE RICH!” But really she was doing what she knew best: being Jewish. She called the popcorn Gucci-corn, but she was just being silly. It was clearly Knock-Off Gucci-corn, the whole theater knew that. Anyway, each time I reached for a handful, I had to be careful not to pick up a Sweet ‘n Low packet or one of the 8,000 tissues she kept in that bag.

Back then popcorn was only three bucks, Nana! What the fuck? I did the math, after all was said and done, you only saved fifteen cents. It’s not 1937, that doesn’t buy you a loaf of bread anymore, Nana.

After the “picture” (as she called it) was over, we snuck into another movie which was halfway through based solely on the mere fact that we could do it for free. She didn’t care that it was Poltergeist II, which would cause her grandson to require plastic sheets on his bed until he was twenty-five. What she cared about was that we saw one and a half movies for the price of one. Now that’s a deal!

Whenever I go food shopping, I’m usually starving, which is the worst possible time to shop because that’s when I want to eat everything. When I pass through the produce section I always grab a bag of grapes, which I enjoy while doing my shopping. But by the time I get to the checkout stand, I’ve eaten almost half the grapes. I’m not gonna pay for a half-eaten bag of grapes, that’s a fuckin rip-off. Screw that, I’d rather hide them on the side of the conveyor belt where the Reader’s Digest and Soap Opera magazines are. Along with the empty bottle of VitaWater I just drank and a Zone bar wrapper. Just saved eight bucks. Winner!

In the candy aisle of my old supermarket, they used to have the self-serve candy drawers filled with gummy worms, chocolate almonds, malt balls and pretzels. They don’t anymore because of me. I would put my head under the spout and drain that shit like I was Augustus Gloop. And I would make multiple loops back to that aisle. Other people would just look at me like I was a sick person, literally foaming at the mouth with chocolate, dripping down my chin. Gotta get that shit down before the camera catches you.

My girlfriend took me out for dinner a few weeks ago and paid for us both. After I got over the initial shock and realized she wasn’t paying for me to make up for an affair she was having behind my back, I was able to start swallowing my food. The bill came and she not-so-subtly broke out a coupon and snuck it into the bill. Or should I say a GROUPON. Groupon is a new website that has these outrageous daily deals where you get a major discount on something like a massage or in our case: a dinner for two: you spend $50 and get $100 worth of food. The only catch, which it doesn’t mention in the fine print, is you have to look like a cheap ass motherfucker and eat dinner in a restaurant with other cheap ass motherfuckers, while the chef whips up your meal, putting half the effort he normally does into it because he’s cooking for a cheap ass motherfucker, who wouldn’t normally eat here. Thanks for dinner, babe, totally worth it!

A good friend of mine who grew up nearby used to invite me to sleepover his house during the summer. Sounds fun when you’re ten years old, right? I wouldn’t realize this was actually torture until I slept there for the first time. Their house was five hundred fucking degrees inside. They wouldn’t turn the goddamn air on. They had it, but they were just too cheap to use it. It was like reliving the Jews’ experience at Bergen-Belsen. They should have made it part of the Birthright Program.

You would walk into the house with a steak and by the time you’re blood sugar dropped and you finished dry heaving, the steak could be resold as beef jerky. And the most amazing thing was that they acted like it was completely normal. Neighbors would walk through with trays of cookie dough and leave with them fully baked; some of the cookies got burnt.

Before I knew it was rude I would make comments like, “Man, it’s hot in here” or “are you guys warm?” And they would always immediately respond in unison, “We’re fine!” as if they practiced it during a secret family meeting where the topic of discussion was How to Convince Everyone Else We’re Not Being Cheap. I felt so bad for my friend, I wanted to call Social Services and have them take him away and put him in a home with A/C. Even if his new parents sexually molested him, it would have been better than risking heat stroke and more importantly my comfort when sleeping over.

I used to have a roommate who didn’t pay for food. He was the last guy to ever reach in his pocket when a bill came, he would literally wait me out to the point where I was like ‘Fuck it, dude, I gotta go, you win. Happy?’

Every single time I’d order Chinese food I would ask him if he wanted anything, and he would always tell me he wasn’t hungry.

Are you sure?
I’m good.
Positive?
Yes, definitely not hungry.
Okay, ‘cuz I am and I’ve been looking forward to this chicken & black bean sauce all day and I really don’t want to share any of it with you.
I’m really not hungry, Steve!
Right, but it won’t be here for 45 minutes…will you be hungry then? Because if you will, I’ll buy something for you. I’ll pay.
I’M. NOT. HUNGRY.
Cool. Because I was bluffing about the ‘buy something for you’ thing.

And then like clockwork, as soon as the food came, he would sit next to me like Pavlov’s dog; you could hear him salivating. Often times that made my food taste better, but other times it was annoying. I had to make sure I didn’t drop anything on the floor, because he would snatch it up before I had a chance to throw it away or spit on it. And I also had to make sure I ate every last bite. Because when I didn’t my leftover scraps would keep him alive.

You know how you see those commercials where you can feed a kid for less than seventy-five cents a day? Well, I was keeping this guy going for half of that. You don’t think that adds up, but when I sat down one afternoon in a fit of pure rage, I made an excel spreadsheet and send it off to my accountant for a huge deduction and he was like, you’re gonna get audited.

I never put my name on anything in the fridge, mainly because everything in the fridge was mine. I put my name on the fridge. If I ever had any leftovers, he would wait until I went until I went to bed and eat them. I would try to stay up later than him, but he would take NoDoz, and come 4:30 am, I had to give up. This is a kid making $150,000 a year who had his head buried IN the refrigerator, to avoid me seeing him. And he wouldn’t eat it all, he would try to make it look like nothing happened, but I would count the pieces of chicken beforehand and I knew. Chicken doesn’t just disappear. It was chicken and black bean sauce, not Chicken & David Blain sauce; you know what I’m saying?

Come on man, funk that!

One Response to Cheap Ass Motherfuckers