I hate cats (not the musical) 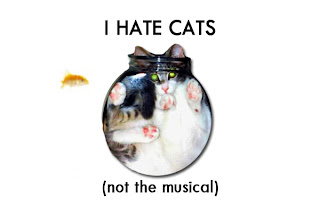 Before my girlfriend moved in with me she warned me that she had a cat and sooner or later it would have to move in with us. So I said, “sure, of course, honey, whatever you need me to say right now in order for us to stop talking about this and continue having sex….” Anyway, I figured the cat or I would die, before anything ever came of it.

But I didn’t die unfortunately. And the good news is cats live to be eighteen — which might as well be forever, because right now he’s 7.

This cat is living the dream. The three of us just moved into a house together (my girlfriend, me and yup, you guessed it, the cat). And he thinks he can just do whatever he wants. He’ll just prance around and lick his little cat balls all over my kitchen counters. Hey kitty, why don’t you try walking across this stove over here, I swear I won’t turn it on. I swear to god. Just try it once. Oh wait, I forgot, you don’t respond to ANYTHING because you’re a cat. You’re “independent.” You “do your own thing.” Fuck you, cat.

Cats don’t bathe. They’re like homeless people. They just lick themselves all day, beg you to feed them and shit into plastic boxes. Get a job!

Whenever I refer to the cat, I won’t use his name, I always call him “the cat” or “your cat” because that’s how you dehumanize something. I read that in Mein Kampf.

I know what you’re thinking right now, why are you such a pussy, Steve? Why don’t you just bury the cat AND your girlfriend while you’re at it? I thought about going all Scott Peterson on his ass, but he had a boat and I don’t. And I need it to look like an accident.

That’s why late night, after my girlfriend goes to sleep, I sneak downstairs and open all the windows and doors in the house and put a trail of mice leading down the driveway, up the street and onto the 405. But there’s so much traffic in LA, he just ends up lowly merging.

How the hell did I end up in this predicament? Oh yeah, I remember. The conversation went something like this…

Why would I care about a tiny little cat? Right? I mean, grow up, Steve, it’s just a measly little cat. NO. IT’S NOT MEASLY! It’s enormous. It’s a fucking mountain lion. It’s like 35 pounds and it belongs at the Mirage in Vegas, not my house.

And to top it all off, it isn’t even a normal cat. He has thumbs.

THUMBS. My girlfriend said it was some pterodactyl cat or some bullshit thing to make him sound special. He’s special all right. Inbred. His parents were brother and sister and those sick bastards had sex with each other. And now I’m living with their freak of a son. Their mongoloid child. He has hands. Ape-like cat hands. And every night I can’t fall asleep because I’m afraid I’m gonna wake up with them around my neck.

He just gave me the thumbs up.

The cat watches me pee. He looks at me while I’m peeing and I can’t go. I get nervous. I don’t want him to know he has a bigger dick than me. Then he’ll have all the power.

Lately, I’ve been trying to “sneeze” a lot and “cough up fake blood” when the cat’s around. I’ve hidden ketchup packets all over the house. I figure the only way I’ll be able to get rid of him is if I am allergic. Why is that? Why is that the only reasonable excuse? Can’t you be mentally allergic to something? Isn’t that enough of a reason? Because my soul is covered in hives and it’s really itchy.

Humans and cats have no relationship. Owning a cat is like owning a goldfish. And that is why cats should be kept in glass bowls filled to the brim with water. I told her I would be okay with that.

Does anybody know where I can buy an ALF? 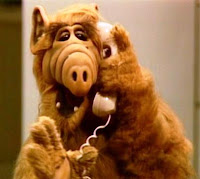