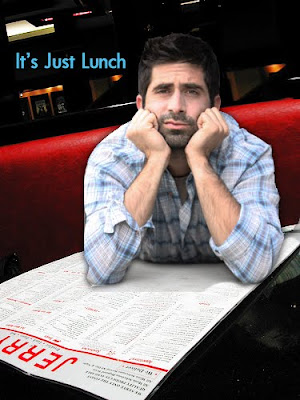 How many goddamn choices do we need on a menu? When I was a kid in school, there were two options in the cafeteria: shitty and shittier. And somehow I always managed to pick one and move on with my fucking life.

I went to Jerry’s Deli on Sunday and the menu was twenty pages long. TWENTY. It contained advertisements on every other page, probably so they could afford to print them. I wanted to fucking Tivo this menu and skip through the commercials so I could just watch what was for dinner.

I’m not gonna sit there and read a goddamn menu for thirty minutes. I hate reading. And you know what bothered me more? I could overhear all the assholes at the other tables making the same piss poor, corny ass jokes about the menu: “This thing needs a Table of Contents, right?!” “I wonder if the Cliff Notes are available!” “Hey, check out chapter 7: Poultry!”

Shut up. ALL OF YOU! What the hell am I gonna order? What if I don’t pick the right thing? GOD FORBID!!!! Screw it, I’m just going to randomly point to something on the menu…..and….eat…THIS.

What the hell is happening to us, guys? We’re filling our days with options instead of opting to fill our days. Take cereal. The classic question, “Would you want to eat the same cereal every day for the rest of your life?” I would if it were Cheerios. But Cheerios isn’t Cheerios anymore. It’s a category. Honey Nut Cheerios now has all these retarded stepbrothers and gay cousins like Fruity and Berry Burst. Let me introduce you to the “Cheerios Family”:

Frosted Cheerios are pretty dope and so are Apple Cinnamon – but if I wanted to eat those cereals I would have bought Apple Jacks or Lucky Charms and just taken the marshmallows out. We’ve gone so crazy with choices that we’re now repeating the old ones. It’s like Charlie & the Chocolate Factory. Why the fuck would you ever re-make a movie like that? Jonny Depp can lick Gene Wilder’s old Jewish balls. The ballsberries taste like ballsberries, Johnny. And I just came up with the next kind of Cheerios.

Too much of the world’s energy goes into food. Five hundred years ago it used to be just like the thing you do in order to keep your body alive. You would eat and spend your day chopping people’s heads off with swords. We were so productive then. Now there are movies and entire television networks devoted to food, where we sit on our fat asses and watch people make food that we can’t eat or taste or even smell.

The funny thing is, I’m a hypocrite. I watch a lot of HGTV and the Food Network. Fuck you, I love it. Top Chef is my favorite show. Suck my dick.

But sometimes I’ll be watching TV and the judges will be diligently analyzing the details of a contestant’s dish – and I’ll have a sudden burst of pure hatred and think to myself – what the fuck are you people talking about right now? Where the hell am I and has the whole world gone crazy?

The following is an actual conversation that took place on the show “Chopped.” You can watch the actual clip right here, it starts at 1:42… http://www.youtube.com/watch?v=dPmAmwIY3Po

Oh…they are talking about clam soup…

JUDGE 1
But he brought broth to the table. The bacon and the clam; they work so well together.

JUDGE 2
But the bacon was limp…it was fatty.

JUDGE 1
But the bacon’s gonna be limp, it was in the soup.

I feel like a show like this would have been fun to screen at Auschwitz. You know, where people were eating wood to survive.

Figuring out where you and your friends want to go for dinner is harder than buying the right car. Which should never be a Mercury Sable. Hands down, the worst question ever is: ‘Where do you want to eat?’

People always ask you this question when they clearly have their minds set on where they want to go. But they can’t just say it, can they? They’d rather have you come up with a million suggestions until you name the one place they were already thinking of. These are the same people who when asked where they want to eat always say, “I don’t care, I’m easy.” Yeah, you’re easy if I can fuckin guess it on the first try.

Nah, I’m not really in the mood for a burger.

Last time I was there I had a bad experience.

JUST TELL ME WHERE YOU WANT TO FUCKING GO!

I hate you. I absolutely hate you as a person. You disgust me. I never want to eat with you again.

Alright, fine! Let’s just go to Papa Johns and get a pizza.

You just named the one place I don’t want to go. Anywhere else! Seriously!

Too many options. Maybe I should just become a vegetarian. Carrots or fucking celery? Done.