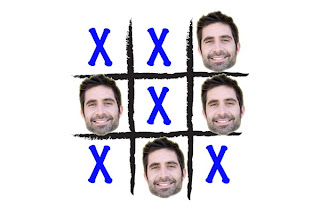 It’s funny, you can date someone for 4 years and after you break up, and a short period of time goes by, you act like complete strangers to one another when you see each other. I mean, we used to stick our fingers inside each other’s butts for crying out loud! And now, it’s like talking to a complete stranger I just met in an elevator.

I bumped into an ex girlfriend of mine not too long ago, while she was with her new boyfriend and I was with my new girlfriend. We said hello to one another and casually bullshitted like we were at some corporate marketing convention in Banquet Room B of the Walacutta, Ohio Ramada. Wouldn’t it be nice if we could just all say what we were thinking?

Steve, meet Ted, he’s the new guy that’s fucking me now.
Hey douche bag! I fuckin hate you!
Ted, Stephen’s the guy with the small penis I was telling you about.
It’s nice to finally put a face on the penis, Steve. Thanks, Ted. So tell me, did she get that vaginal reconstructive surgery she always used to talk about or does her pussy still look like a sandwich from the Carnegie deli?I’m so glad you brought that up, Steve, that’s not normal, is it? I feel like it should come with a side of potato salad or something!
It’s kinda why I broke up with her. You’re better looking than me by the way, Ted. Did you know that?
I did know that, Steve. I think everyone in this bar knows that. Including your new girlfriend who clearly wants to fuck me. Oooooh! Nice one, Ted, but I’m not so sure about that.
Babe. I do. And I’m gonna fuck him for sure — behind your back.
Sounds good. Anyway, the two of you have fun, we’re gonna walk away now and start talking shit about you guys.
Go fuck yourselves!

And why is it when I run into my ex girlfriend and I’m with my new girlfriend my ex girlfriend has to look like absolute shit. Put some fuckin makeup on, girl. And why are you fat now? You’re embarrassing me. Now I have to have this conversation with the my new girl the entire ride home:

I like to run into ex girlfriends when I’m doing something really cool like seeing Harry Potter &amp; the Half Blood Prince in a movie theater alone. That way she can be really jealous of me and see how independent I am.

Oh hey Steve! This is my nephew, David, he’s six, and also really excited about seeing this movie, do you guys want to catch up for a second while I go call my new boyfriend and let him know how much of a fucking loser you are?
Sure. So…David…do you jerk off to Hermione too?

The important thing to remember when running into an ex is to always act like you’re doing way better then you actually are. I want them to think that I’m ahead of them in the game of life. So in my case that means lying.

I just won the Pulitzer. The Pulitzer Prize. I won it. What have you been up to? Did you win the Pulitzer because I did?Congratulations Steve, that’s great my husband’s an author. What’s the name of your book?
Uh-, it’s called….uh, Catcher in the Rye 2. It’s about a corned beef sandwich….

Try to think up your lies ahead of time.

After you break up with someone, one person should volunteer to leave the country and never return. You take North America and I’ll take Albania, and if you’re ever going to be in my area, let me know and I’ll just kill myself. I’d rather do that than see you again.